λ. Does a PhD student know his lab?

Last week in cryptography course, prof Matt Green mentions a paper by Russell Impagliazzo talking about five possible worlds regarding whether NP is easy (P=NP) or NP is hard only in the worst case, whether one-way function exists, whether public-key cryptography exists. It’s quite interesting for I just vaguely believed if P=NP, the whole cryptography is over. (When P=NP many parts of Programming Language is over because heuristics and optimization will become trivial. Logic programming can solve most questions efficiently).

(I am not off-topic.) I suddenly realized my friend is his PhD student. So I asked her, do you read this paper? No. Not for the original paper but reiterated by others. I had a naïve convention that every PhD should know what had done by his advisor and his lab. So naïve.

In last post I mention that staged programming on SPLASH is so fresh and interesting to me. After skipping through projects on my lab’s webpage as well as private repo for papers, presentations, and many other records. There is a project on staged programming for some hardware. I should have found it interesting earlier.

Both Y. Annie Liu, a PLMW speaker and William E. Byrd, main creator of miniKanren mention Jason Eisner, a NLP expert in JHU, in our talking. (I took two his courses NLP and Declariave Methods in previous semesters.) The reason making him known in PL comunnity may be Dyna language. I wrote some comments on NLP in last post (3.11, 3.14). I also sent him an email for these stuffs and got his reply:

Boroditsky is very well-known, as the leading voice of what is called “neo-Whorfianism.” (Did she really talk about PL?) Regarding your section 3.11, there have been a number of PL designers (notably Larry Wall) who have cited inspiration from natural languages. IMHO, perhaps the most important thing that natural languages have is ambiguity, where it is left to the interpreter to figure out the meaning. I’ve often wondered whether it would make sense to allow more ambiguity in PLs, where unit tests, type analysis, and other information are used to disambiguate. - Jason

Besides paper rejection is common, another idea got from PLMW is PL is fundamental to other areas in CS. Of course, I believe this otherwise I won’t be a PL guy. The point is, we should achieve and get acknowledged from other communities.

λ. For the Milkshake

I met William Byrd at aquarium banquet. He demoed a GUI application for miniKanren when I passed. Since it’s synthesizing a Racket program, I immediately realized it’s miniKanren-like. My PL seminar talked miniKanren and its paper in September. I would like to say do you know miniKanren? I think you are doing similar work. At that moment I didn’t know this GUI is for miniKanren nor did I know he is the author…

After the banquet, we were wandering. At first they decided to buy bubble tea at Bubble World. But the sad story was: 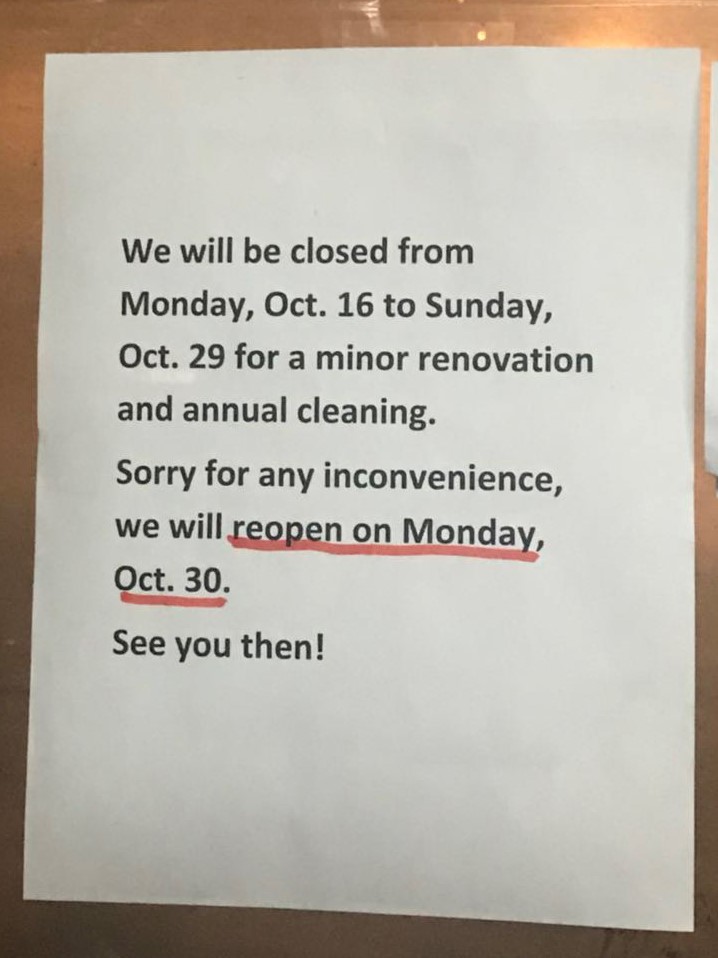 We are closed during your conference, Vancouver, Canada

(The sadder was I took this picture outside Bubble World, on my first night at Vanconver, just after putting luggages in hotel, raining high with much water on street, with wet shoes and without food.) After cheating by Yelp for another bubble tea shop, Bryd suggested milkshake. It’s good.

We talked about some bubble tea brands Bryd tried in Shanghai. I felt a little strange since I am not fond of bubble tea before coming to United States. Nor was I the kind of person who was willing to buy one during a raining night. Something changes.